Degree in Pedagogy of Dance and Flamenco 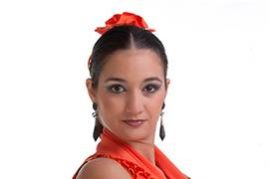 Director of Estudio Flamenco Sevilla. Bachelor in Pedagogy of Dance, Esther Vélez is a guarantee for learning at all levels

Esther Vélez was born in Seville.

Professional dancer of Flamenco and dance and dance teacher.

Graduated in Dance Pedagogy at the Superior Dance Conservatory of Malaga and Diploma in Spanish Dance at the “Antonio Ruiz Soler” Conservatory in Seville, she has extensive training in Flamenco and Spanish dance.

The artistic career of Esther Vélez began in 1996 when she started to travel around the world with different Flamenco groups (France, Japan, Kuwait, Germany, Holland, China, Portugal …) She works at TVE doing Fair Specials and at “Party Night” . She was part of the Flamenco group of Cristina Hoyos in 2003 and 2004 and worked at the Jerez Festival with the Flamenco group of the master Mario Maya.
She has extensive experience of Flamenco tablaos, working for more than 10 years between “El Patio Sevillano”, “El Palacio Andaluz”, “El Arenal”, “Los Gallos”, “Cuevas de Granada y el Albaicín“La Casa de la Memoria” and “El Museo del Baile Flamenco Cristina Hoyos”.
She has participated in the film “Flamenco” by Carlos Saura and the collection “Bailaoras” by the photographer Paco Sánchez.

The teaching work of Esther Vélez has continued from 1997 to the present. She has taught classes at, among many other places: